What is the significance of the veil of the Jewish Temple being ripped in half from top to bottom?

It can indicate several things: the action of a  grief-stricken a father ripping this garments for the loss of a first or only born son.  It could indicate divine displeasure with the  symbols of worship and the henceforth rejection  of that particular method of worship, or it could indicate that the separation between God and man was over. These are not mutually exclusive.

Matthew 27:50-51 states, "Jesus, when he had cried again with a loud voice, yielded up the ghost. And, behold, the veil of the temple was rent in twain from the top to the bottom."

The functional purpose of the veil in the Old Testament

The "veil" in this passage refers to the large, heavy curtain separating the Holy of Holies, the most holy place of Jewish liturgy, from the rest of the Temple. The Holy of Holies was off-limits for everyone except the High Priest, and then only once a year on the annual Day of Atonement. (Yom Kippur).

A full account of this is given in Leviticus 16. The Holy of Holies was room that contained the Ark of the Covenant with the Mercy Seat covering the top of the Ark. The veil stood in front of these sacred objects. The sight of God's presence on the Mercy Seat could be lethal so God instructed the Levites how to make and hang a veil which was substantial and heavy. The heavy curtain prevented people from accidently falling into the holy place. When offering the yearly sacrifice the high priest tied a rope around his waist and wore bells  sewn onto his priestly robes so if the bells went silent (indicating a death or accident) other Levites could pull the priest out of the Holy of Holies without entering. 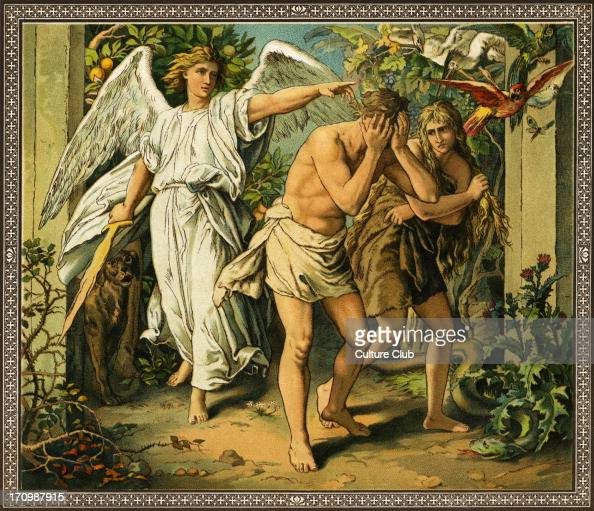 Josephus reported that the veil was four inches thick, it was changed every year, and that horses tied to each side could not pull it apart. It was "wondrously wrought". The colors were scarlet, purple, blue and gold. The dimensions were about 60 by 30 feet. It was very heavy and took 300 priests to adjust it as it hung over the lintel on the East side of the temple. On each side of the veil cherubim were embroidered in gold. Cherubim is the plural of Cherub in Hebrew.

The Blessed Mother, as child in the Temple, was tasked to help weave the veil each year. Her particular specialty was the purple weaving. One day she accidently pierced herself while at this holy task, a harbinger of the sorrow to come to her in the future.

Why was such a priceless and heavy tapestry changed every year?
The answer is that it had accumulated lambs' blood on it and it was probably changed close to  or on the Day of Atonement  (see Leviticus 16:30 . It is hard to imagine how something that huge and heavy could be re-constructed in a year's time.

Throughout the Jewish liturgical year lamb's blood representing the sins by individual sinners who committed serious sins accumulated on the veil.  Sinners would buy a lamb slay it by cutting its throat and collecting its blood in a basin for the priest to sprinkle on the holy veil.  This was done daily as needed and done in the sanctuary or "holy place", the room in front of the veil, but not the "Holy of Holies" where the Ark reposed. The petitioning sinner must then roast the lamb and eat it.

To the Jewish mind, even to this day, the big feast for remission of sins was the Day of Atonement which was the 10th day of the 7th month. On that day sacrifices were offered "for the people" and the priests of Israel. They consisted of goat's blood and a bullock's blood, but never lamb's blood.

The bullock was for the sins of  the high priest, his family, and two goats for the people. The bullock’s blood was taken into the sanctuary but this time it wasn’t sprinkled on the veil, it was sprinkled on right side of the Mercy Seat covering the Ark under which lay the law of God. Then the high priest  would go back out to the courtyard and sacrifice one of the goats and bring its blood into the most holy place and sprinkle its blood on the mercy seat as well. This sacrifice was for the collective sins of national Israel. Rabbinic tradition says that the Messiah will sprinkle his own blood on the left (West)  side of the Mercy seat when he comes. How this would be done was never detailed.

Our high priest, Jesus
After sprinkling the Mercy Seat, the high priest would remain in darkness behind the veil and pray fervently for three hours for the remission of sins. This is a picture of our high priest on the cross paying for us for three awesome terrible hours.  The other goat was blessed and bore sins of the people and sent outside the city into the wilderness. On its horn and on the temple gate was attached a scarlet ribbon. It would turn miraculously turn white, and did for centuries,  to indicate that God had accepted the sins upon the scapegoat.   After Christ died and the veil was rent the ribbon never turned white again. This would have occurred  six months later on the Day of Atonement. Thus, God never accepted those types of sacrifices again for the remission of sins

Why the Cherubim at the East gates of Eden 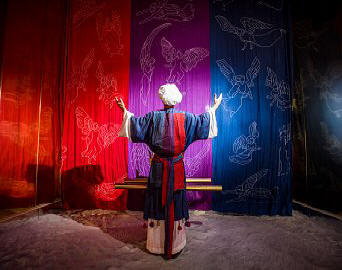 After the fall, God placed Cherubim as heavenly guardians with a flaming sword at the eastern gate. This is the last we see of Eden, where God was present on Earth to regularly converse with Adam.  This was a sign that a great chasm  now separated God from man when that first sin entered  human race. The loving God promised His relationship would be restored one day by the "seed of the woman".

In fact, it is my belief, that God's plan was to create another being of fully spiritual creature (man) and allow him to be available to do both good and evil.  But by following God's ordinances and commandments faithfully he would be enabled to participate with God to undo the evil and reverse  the malevolence by Satan with his first sin before the creation of man.  Clearly, the human race required a lot of supernatural help on its journey toward God.

Heaven available  and access to God now restored.
With the rending of the veil, behind which stood the Holy of Holies, the opening of heaven and access to God was once again restored.   The curtain separating the Holy of Holies which was the new abode of God on Earth, was exposed  the second that Christ died, Cherubim embroidered on the magnificent curtain no longer were need to stand guard.

As a practical matter, there was no Ark available when Christ died. It had been hidden away some five centuries prior.

The Jews performed their liturgical ministrations over the "corner stone" of the old temple since then.

Nevertheless, sacrifices of the Jewish priesthood were now defunct. Every believer now has direct access to God through Jesus Christ.  The concomitant earthquake could not have ripped the veil in two. So the rending of the veil was supernatural as it was symbolic and perhaps done by a cherub with a sword. In fact, observers in the Temple at the time of Jesus' death saw a Cherub rending the veil with a sword.

For 40 years after the crucifixion Jewish worship went back to business a usual and a new veil was woven and hung yearly.

Rebuilding the Temple and offering sacrifices to God in it is unacceptable to him
Since Satan knows salvation's plan he will want to usurp it when possible. Re-building the Temple is a prophecy yet to be fulfilled. Orthodox Jews say their messiah will do it. But the doer is prophesized to be the anti-Christ.

Can you imagine how delighted the Jews will be to have their Temple back after 2,000 years? Can you see the frenzy to restore it should the Ark of the Covenant be revealed? Both of these are end time events.  Jews will remain blind at first to the unacceptability of animal offerings.  Christ told them, "I come in my Father's name and you did not receive me.  If another comes in his own name, he, you will receive".  (John 5:23).

Perhaps, not the restored Temple, but the sacrifice offered therein may be the "abomination which causes desolation".  Few will recognize it as such due to the temporary cessation of  strife over the most disputed 40 acres in the world.

"After the slaves were bought back with purification for sin Christ sat down at the right hand of the majesty in heaven" (Hebrews 1:3). In fact, Hebrews is a book that details the significance of rending the veil separating God from man.

Given that angels, in fact, Cherubim, were selected to be present at the fall of man and  were present at his re-unification with God at the moment Christ died, the case is made that  price for sin was fully paid and God is now accessible to all men through Christ. "No one comes to the Father except through me".  (John 6:44).

More on Jewish worship during the Temple period